“Great work is done by people who are not afraid to be great.” – Fernando Flores.

This has proved to be right by one of our students, Harshith Nadella. He is passionate about football and wants to achieve success in it. In an interview conducted with him and his parents, he speaks about his passion for football and the hard work he is doing to achieve his goals. His parents throw some light on his interests, challenges they face and how he got into football.

Talent receives applause only if it is recognized. In a conversation with Harshith’s parents, Mr. Bhanu Prakash recalled how and when they were introduced to his talents, it was the time when Mr. Prakash’s nephew visited India. He was trained in football for 3 years in the UK. During a family outing to a mall, Harshith and the nephew were playing football in a play zone. Harshith performed better than him and he requested his parents he had potential and his talent should not go waste. This proved to be a moment of opportunity to him as he was admitted to Sherwood High’s football team where he gained momentum. Though Harshith admired cricket, he was pulled to his talent by his friend Pawan, who motivated him to play football.

For Harshith’s parents, it was no bed of roses to move with his passion. Speaking about the challenges and struggles of finding a good football academy which was closer to the school/home and to manage their timings and schedules was a tough job. Lending a helping hand, Sherwood High introduced them to BFC, but it was not chosen as it included long travelling. Later, after almost a year, Mrs. Bhanu Prakash came across Barca Academy where he was admitted. 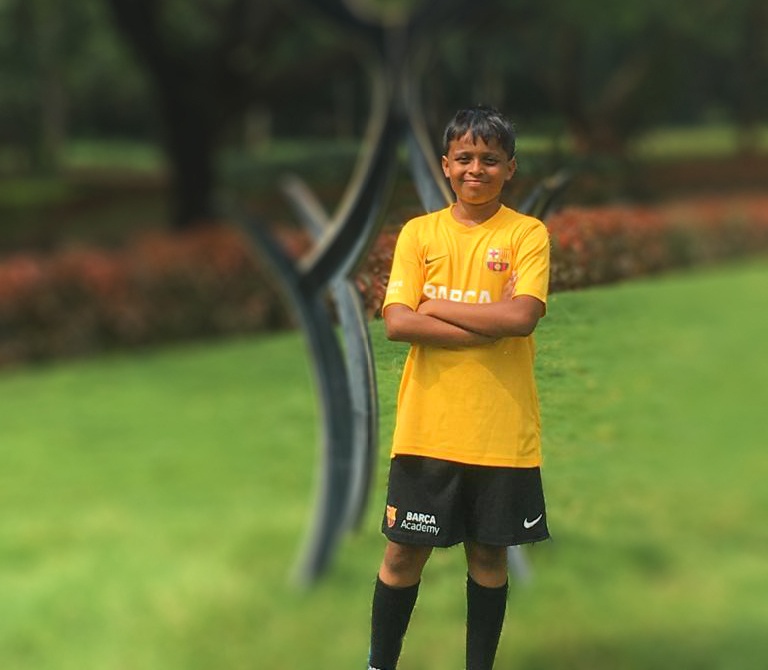 Speaking to us, Harshith threw some light on the club he played for, i.e.…, Barca Academy. He stated that after looking for a year, this club helped him boost his talent and has helped him shine through various matches. He has been practising football for three years out of which one year was spent in Barca Academy. This year he was selected for Barca Academy Asia Pacific 2020 Tournament held in Delhi in January 2020. He was selected for playing U12 Barca World Cup 2020 in Spain in April 2020 where the best Barca teams from around the world will compete, but due to the COVID 19 that tournament was cancelled.

With a host of options in the sports field, why would Harshith choose football? Answering this Harshith said it was destiny calling and when destiny calls, you practice and he would continue to practice to be the best. He was also of the opinion that “An excellent Football player is one whose heart lies in the sport and who has potential towards it. A hardworking person who trains a lot and helps his team is an excellent football player”. 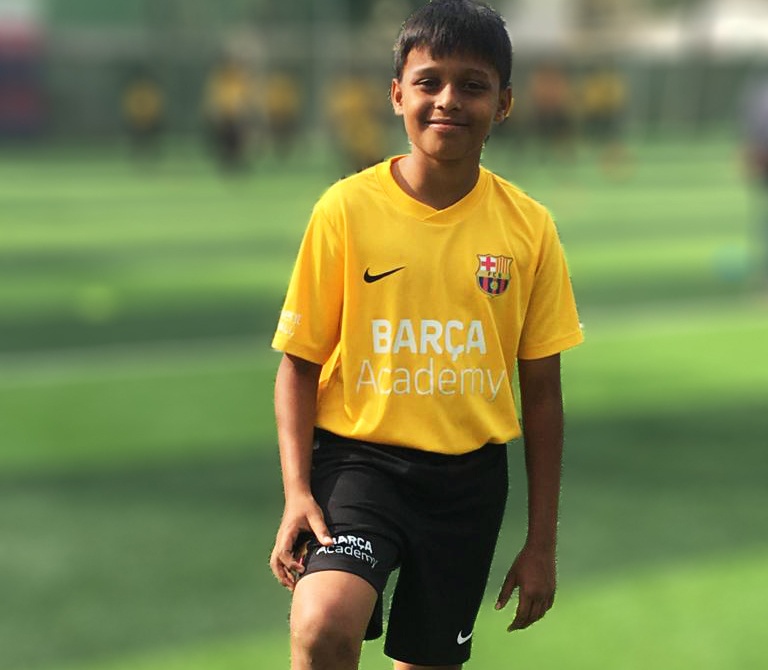 The world lies in Inspiration. We all need someone who inspires us to do better than we know-how. When asked about Harshith’s inspiration, the answer comes almost instantly. Any guesses?? Yes, it’s none other than Lionel Messi. Harshith admires his talent because he sees that Messi always puts his best foot forward, adding to it, Harshith highlighted that Messi makes sure that he attends all his matches, even if he wasn’t playing a particular match because of injuries. He goes up on the field, gives moral support and motivates them all. He states, “I like him not just for his talent but for the humanity he displays and for the overall personality that he is.”

Further, into our conversation, Harshith discussed his training schedules and the challenges he faced getting into football. Like said earlier, he had faced a challenge of finding a good academy which almost took a whole year. Coming to the challenges faced during practice, Harshith smiles, as asked for the reason for his smile, our budding football player states that he enjoys football so much that he finds nothing challenging, from practising every day to attending his coaching classes religiously or travelling to different places. He considers it as a process to excel and enjoys it thoroughly.

When asked about the feeling of the first goal he scored he stated: “it thrilled me, I started believing in myself more and felt that I am progressing.” So this first goal set the ball rolling for Harshith. He continued, “I want to excel in this sport and play for the Indian team as a short-term and a long-term goal. I want to represent my state, earn gold medals for it and the country and make my family and friends proud.” A popular saying goes likewise “Dreams without goals are just dreams,” and Harshith is all set to make his dream come true. 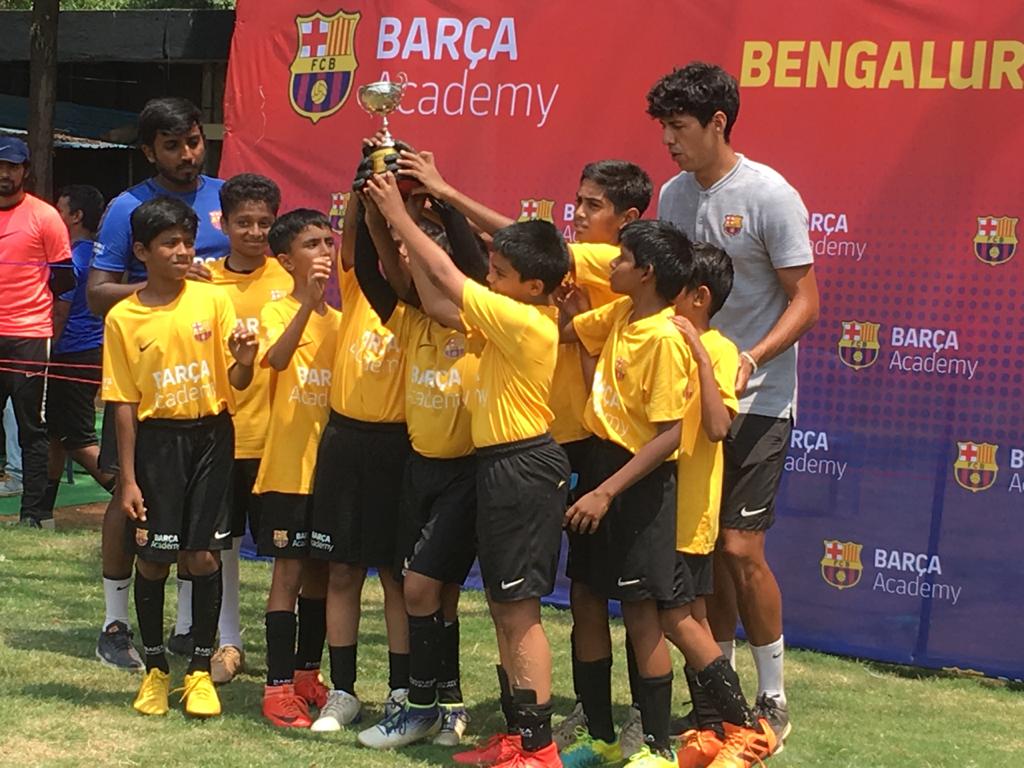 Harshith expresses his gratitude towards Sherwood High in the interview. He started playing in Grade 4 and was made sub-junior captain in his Grade 5. During his sub-junior captaincy, he led his team to victory. Later, in Grade 6, his team won the trophy. Mr. Nadella also expressed his views regarding Sherwood High. He stated, “We are happy with the school and grateful to the coach, Mr. Manohar. He encouraged Harshith and keeps motivating him along with the training. The new turf ground in the school has been extremely helpful for his training. I would highlight the fact that the school has given importance to both studies and sports. The smooth management of the school has also helped.”

Apart from football, Harshith revealed he enjoys reading, going on outings, playing board games, spending time with friends and family etc,. Harshith also shared with us his routine and some memorable moments he had during the game. Speaking of his routine, he informed, he trains 3 days a week. On the other days, he practices at home/school, which keeps him fit and well in form. When we asked about a memorable moment he remembers, he stated, “In Delhi this year I had a chance to meet foreign players and play with them.”

“Successful people are not gifted; they just work hard and then succeed on purpose.” Harshith is working hard for the purpose and we hope that he will achieve the best in life.