“Your dreams are what define your individuality. They have the power to give you wings and make you fly high.”- P. V. Sindhu.

Kushal’s journey to becoming a triumphing young badminton star began when his father took him regularly to play badminton just as a fun sport. As the famous Chinese proverb goes ‘The journey of a thousand miles began with single steps’. It all started one day, with the annual sports meet. Later when they took him to a local badminton court, they saw him show a very keen interest in the sport. When he was put for training, his coach was extremely impressed by his interest, talent and dedication.  His workout patterns were rigorous and as he progressed and held his enthusiasm to badminton, he was admitted to professional coaching. Kushal is very grateful to his Badminton coach Shashikumar T S for his dedicated coaching, support, and endless encouragement.

Though, his parents were not so sure in the beginning and thought that it was only a fading interest, which is very common in children they nonetheless encouraged Kushal. Initially they did not consider professional training, so for the first six months they took it in a slow pace and seeing his enthusiasm and ever growing vigor to the sport, the coaching increased in time and duration. Before covid, his coaching happened 5 days a week, and now with the pandemic though it isn’t as active as it used to be and despite missing 5 months of training, there was no much change in his playing or his energy level from pre covid times to now.

It is only understandable that, as parents we do not want to risk our children’s health no matter what. So how does Kushal still maintain the same level of game? he says; the reason is that racket sport needs a lot of stamina, about 60 to 70% and the rest 30% would be the strokes.( according to most coaches) So he went for jogging, running, did his exercises diligently and concentrated on keeping himself fit. Also, his father took him to clubs in order to play with him on many occasions, so he did not lose touch with the sport. His parents are so absolutely proud and say that he is a very disciplined child, and under complete lock-down he worked out at home rigorously, and yoga helped keep him steady and motivated. 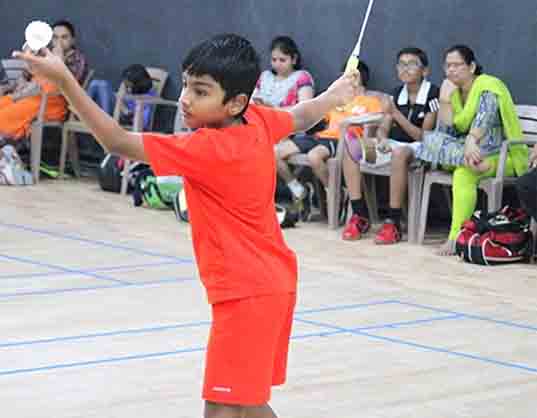 It is believed to be imperative in the Indian education system and society, to pose a great emphasis on a student’s academics, while pushing extracurricular activities to take a back seat. It is very true that one’s High School, Graduation and Post-Graduation marks are something based on which people decide your success. Though most parents would probably be obsessed with their children’s academics, Kushal’s parents thought otherwise, even though he never disappointed his parents in his academic score. They tried to find what interested their child most and directed Kushal towards a goal. As his parents showed confidence in him and helped him in every way that they could, to better him and to focus on his goal, they had to undergo many challenges nevertheless.

As the famous Quote by Seneca says “It is a rough road that leads to the heights of greatness.”

We are all aware that success never comes easy; all successful people have had struggles to achieve their dreams. It is no different in the case of Kushal. When we asked his parents as to what were the challenges they faced, they said that they only got to know about the kind of dedication and time Kushal’s routine required after they got into it. They realized that for him to be successful, they had to face many challenges. The coaching centre where Kushal practices is about 17 kilometers from his house, so the daily commute was a huge challenge, keeping in consideration, the kind of traffic that Bangalore has. Many tournaments that Kushal was a part of happened across Bangalore, so there was a lot of travel required there too.  They had to travel out of Bangalore for state level tournaments very often as well.  Juggling between work and keeping their child’s interest at heart, the time management they had to do, is not an easy feat to achieve.

Kushal aims to get the first rank under 13 and win the Championship within the state as a short term goal and to win singles/ doubles in the world championship in the long term. Kushal is not only excellent in one sport but in two! He is great in Karate as well, and already has a brown belt and aims to compete for a black belt eventually. Kushal heartily thanks his Karate Master Srikanth for his ever-present support and encouragement. As we said, he is a boy of many talents. Including badminton and Karate, he also likes to play football. Though he is not as passionate to pursue football as he is towards badminton and karate, he plays with his friends recreationally. He also likes reading books. Despite his very busy schedule, between school, education, coaching and tournaments, he has also read several series like Harry Potter, Geronimo Stilton and is well aware of mythology too. We are spellbound by his Multipotentiality. 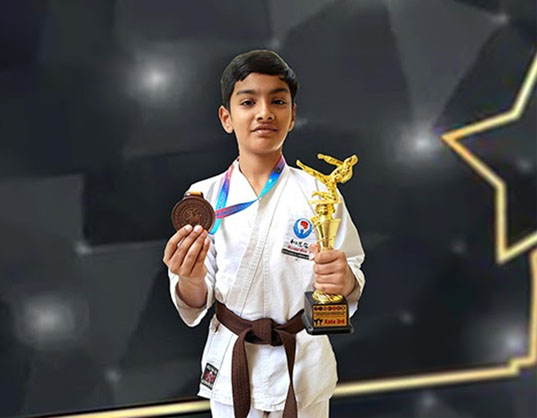 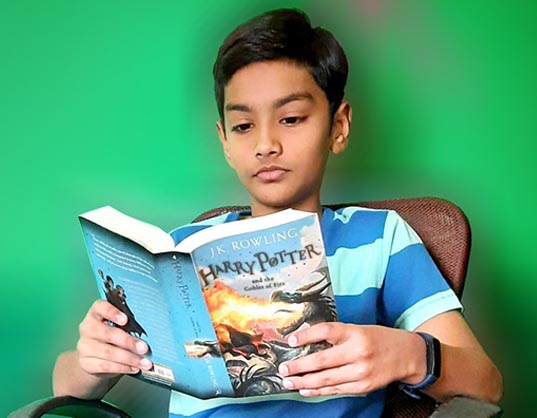 When asked what role Sherwood High as a school played, Kushal and his parents said that they’re very thankful to Sherwood High, as the school was very helpful in many aspects. Kushal says that he was helped and encouraged at all times. His parents believe that the school is unlike any other, as Sherwood High is very supportive and promotes extracurricular activities just as much as curriculum. They say that Sherwood High is keen to see their students excel in sports, which the parents feel is not so much an attribute that every school has. They especially thank the principal, the management and the teaching faculty as they were very supportive. The teachers were very supportive even when he had incomplete homework at times; they gave him extra time to complete his homework. Kushal’s mother feels that they would not have been able to manage between his studies, coaching and their work life, if the teachers hadn’t taken the responsibility of his studies on themselves. The school also let him off early to help him with his training sessions at times. According to Kushal and his parents Sherwood High’s contribution has been immense on his journey and success, and call it the collective team effort.

Sherwood High focuses on promoting physical activity and how beneficial it can be for society. There is no shortage of passion and commitment to sports in growing children, identifying those talents and helping them achieve their dreams is what we believe in and hope every parent also does

Kushal likes to play badminton because he had a general liking towards racket Sports from the beginning, and he felt badminton was the best of it. He likes the sport because it’s fast-paced. About karate he feels that it is a self-defense sport which is essential for growing children, and both of the sports that he likes; require high energy and stamina. Kushal aspires to become a great badminton player and his role model is Kento momota; as his game is very smooth and his style and game are both excellent.

As it is the case with all aspiring personalities, sportsmen too have to deal with pressure.

“When every physical and mental resources is focused, one’s power to solve a problem multiplies tremendously.”- Norman Vincent Peale.

So, what mental tools does Kushal use to focus when he is under pressure?

He does yoga on a regular basis, and when he is on field and yoga and meditation are not a possibility, he does breathing exercises to focus. It is true that limited resources put a brake on what one can achieve, despite the passion or the effort. Therefore, Kushal not only wants to succeed in his own career but wants to help children who are good at athletic skills but unable to train professionally. He wants to train them personally and help them in any way that he can.

One of the tournaments that Kushal had won, he had received the Trophy from Bangalore Raptors! He later took autographs and pictures with them. Srikanth kidambi the Indian Badminton player was there, and he played with him during a store opening. It was a dream come true moment for Kushal to play with him and to receive his trophy from the Raptors. Kushal thinks of this, as his most fond memory. 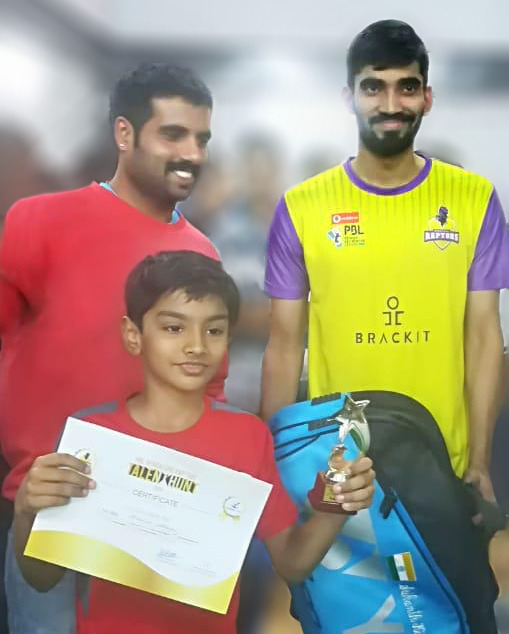 It is very true when they say, that an athlete’s job is to perform and awards and accolades follow. These words prove true for Kushal and his mettle and dedication with which he has brought a lot of laurels for himself and has made Sherwood high proud.

He also holds many trophies, which are as follows:

1: Winner in U10 boys at Legacy sports academy

2: Winner in U13 boys single at Shuttler’s Alley

3: Winner in U10 at Raising Venus Academy

4: Winner in U12 boys at Smash sports academy

5:Winner in U10 boys at Smash sports academy

7: Runner in U11 boys at Smash sports academy

10: Runner in U12 boys at Smash sports academy

11: Runner in U10 boys at Rajiv Gandhi badminton academy. 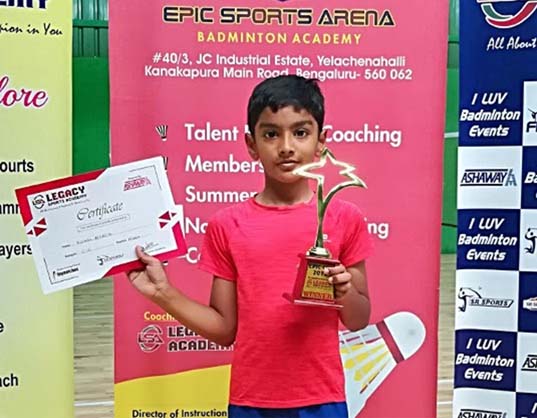 Before covid, his coaching happened 5 days a week, and now with the pandemic though it isn’t as active as it used to be and despite missing 5 months of training, there was no much change in his playing or his energy level from pre covid times to now.

It is believed that your passion takes you ahead in life, and standing up to the challenges of life without caring for the consequences, is what makes one Successful. Throughout Kushal’s journey, his parents have stood beside him as strong pillars and the school also has helped in giving Wings to the dreams of Kushal. Kushal has come a long way and still has ways go. Our young Kushal story of success and struggle inspires us to never quit even during times of difficulties. Even if there is a pandemic happening, you have to follow your dreams no matter what comes in your way. As the very famous quote by Dr APJ Abdul Kalam, goes “All birds find shelter during rain but the Eagle avoids Rain by flying above the clouds”.