There is a popular statement reading “Nobody who ever gave their best regretted it”. Introducing to you, Ms. Pahuni Pawar, a tenth grade student of our institution, who has stood by this statement and now is a professional athlete at a young age of 15. She has represented Karnataka and South zone in 10 meters Air Rifle competition in the youth category and also is the title-holder of the event. Looking at her performance, they called her up for Indian team trails for 3 major categories, which is a moment of pride for us. She is hardworking and aspires to win medals for the country at international tournaments like the Commonwealth games and the Olympics and many more. 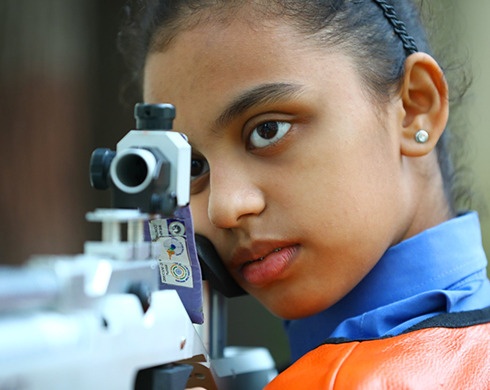 With true devotion towards her sport and tireless training sessions that starts at 6 in the mornings, regardless of different seasons, she continued to face the competitions ahead. Few times her training sessions continue in the evenings as well. Over the weekend, the training becomes more stringent as she shuttles between Hawkeye Academy and SAI Shooting Range at Bangalore University. This amount of hard work has earned her many titles; to be precise in one year she has five golds, two silvers and five bronze medals. We can state that the pains Pahuni is facing today will be her strength tomorrow.

Pahuni acknowledges that all her hard work will, for sure, lead her to a brighter and better future. She goes one step ahead saying that this acknowledgement helps her and motivates her to practice every day and to gain her success drop by drop with every title/victory she gets. The path on which Pahuni’s walking is not everybody’s cup of tea. She faces many challenges at every walk of her life. To state some, it may be in finding the right balance between school-related works, having sufficient time to practice her sport and managing travel related issues to different parts of the country.

Looking back into Pahuni’s student life, she was an active girl from the very beginning as she actively took part in various extracurricular activities like dance, painting and singing etc.., which made her an all-rounder by all means. There is a moment in everyone’s life where they have a chance to kick-start their future.

Regarding Pahuni’s, it was at the Hawkeye Shooting Academy. One fine day, when Pahuni’s parents were passing by Sherwood High, they came across a banner which was titled Hawkeye Shooting Academy. It is here where Pahuni met her destiny as her parents admitted her to this institute. There is a famous phrase which goes like this, “A Good Coach Can Change a Game, but a Great Coach Can Change a Life”, this acts true in Pahuni’s life as her hard work and dedication was recognised by her coach Mr. Manjunath and Mr. Sharanendra KY, who later trained her, motivated her and helped her to channelize all her energy into shooting and sculpted the best out of her. It was her calm and composed nature which benefited her initially.

For any athlete, especially who is into this field from a young age, maintaining a balance between personal life and professional life becomes a great challenge. Pahuni was successful in overcoming all these hurdles as her parents stood like a strong pillar in her support. It was her parents who shared all her difficulties and backed her up whenever she felt low. They were there with her for everything, in every aspect; let it be related to rigorous training as she represented her state and hardwork which is necessary for it, frequent travelling where they accompanied her and encouraged her during her games and the most important among all was focusing on her academics as it forms a base for all other activities. Her friends and her grandparents are equally important as they form a means of support to her.

She makes it a point to spend as much time as possible with them, for they are her strength and comfort. They also help her be mentally strong, which is a very important factor in one’s life. There were lots of practical problems, which usually occurred in her life and here her parents acted as the source for solving the problem, which kept her away from tensity and as a result she was refreshed.

‘If the school Principal is strong, motivated and a good manager who outlines expectations for staff and students, then the school makes progress’. This is also true in Pahuni’s case. Pahuni and her parents thank the Principal for being helpful throughout the year since she got pro and took up 10m Air Rifle as a professional sport. Her travelling schedule includes travelling every month for competitions. The support and encouragement provided by the Principal and the school under many difficult circumstances, is now fruitful. Sherwood High expects to produce many students like Pahuni who would represent our institute and bring fame to the nation.

The role of a teacher is to create the conditions for invention rather than providing ready-made knowledge. Pahuni and her parents convey their gratitude towards teaching staff and especially the sports teacher for all their support and directions which they have provided to her in all walks of her life. Pahuni along with her parents extend their appreciation to the Management, who provided her an opportunity to represent the school at a national level. 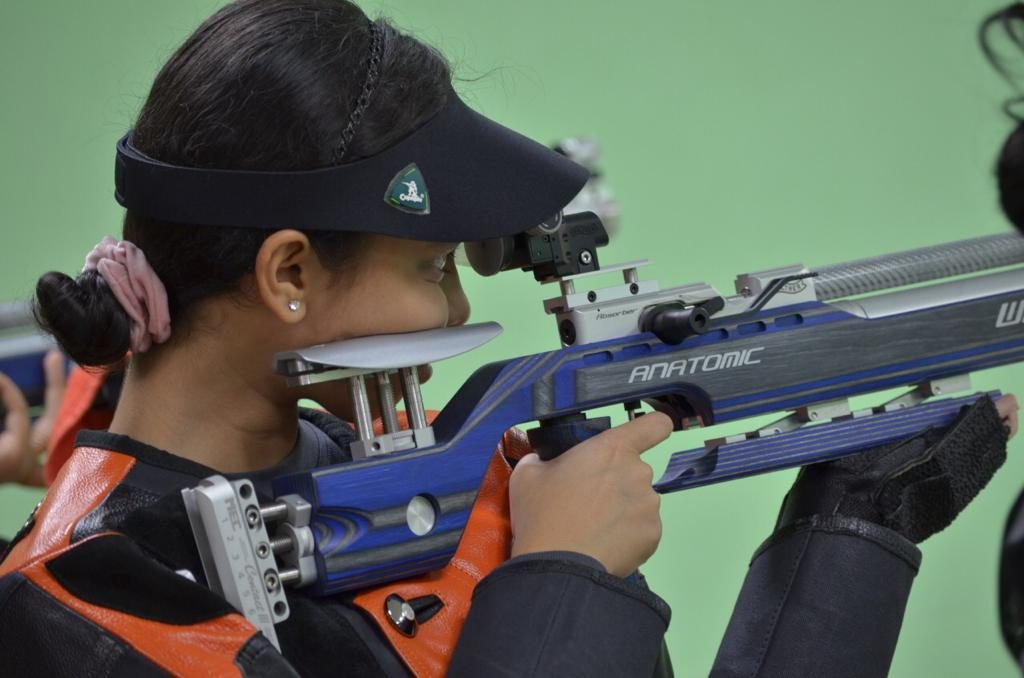 At last we would leave her with a small message, that is “Dream Big, Stay Positive, Work Hard and Enjoy the journey” We, here at Sherwood High believe that your discipline, hard-work and sheer dedication will take you to the apex of success. We wish you all the very best for your future endeavours.