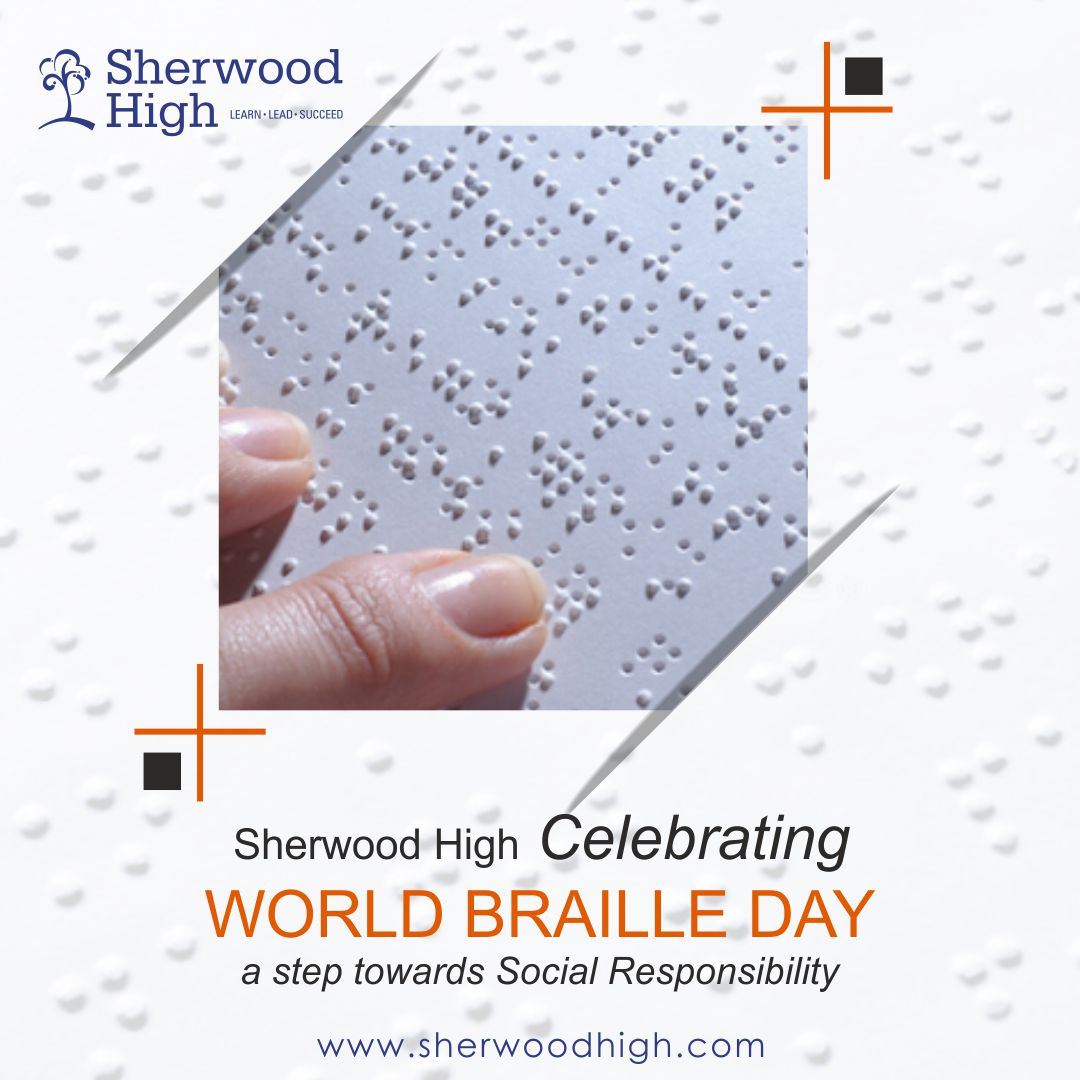 World Braille Day is an International observance held on 4th January every year which celebrates awareness of the usefulness of braille as an instrument of communication in the full realisation of human rights for visually impaired people. At Sherwood High, we highly believe in inculcating values on social subjects and promoting consciousness about topics that are essential among our students.

To talk about the importance of braille, let us first begin with a story; The Story of Helen Keller.

So, why are we talking about Helen Keller?

Well, many of you may have read or heard about her, while some of you may not have. This is to let you know about how she overcame the struggles of being both deaf and blind by never giving up. She dedicated her life to helping others and changed the world despite her disabilities. Her story is an inspiration to all to show that anybody can overcome anything by perseverance and by never giving up.

Keller was only 19 months old when she contracted a rare infection that left her both deaf and blind, completely changing her life. By the age of 7, she had developed over 60 home signs to communicate with her family. Despite her condition, her family was very determined about her having the same opportunities as everyone else. Keller started learning at the Perkins Institute for the Blind, and the school’s former student Anne Sullivan who was herself visually impaired became Keller’s instructor.

With her family’s support and Miss Sullivan’s help Keller entered Cambridge School for young ladies and later joined Harvard University. she had many friends and was very much in touch with the outside world, she would enjoy music by the feeling of the vibration of the beats, she could have a strong connection with nature and animals through touch, she could read people’s lips with her hands and became proficient at using braille!

Helen Keller was a prolific author, lecturer, and political activist, and she was the first deaf-blind person to earn a bachelor’s degree with the help of the Braille learning system.

Now, keeping this in mind, let us see more on what is Braille and more on its importance.

Braille is a tactile representation of alphabets and numerical symbols using 6 dots to represent each number, letter, musical, mathematical, and scientific symbols.

Braille is named after its inventor Louis Braille, 19th century France. This is used by partially sighted and visually impaired people to read the same books as those that are printed in the visual fonts.

WHY IS IT SO IMPORTANT?

Learning and knowing braille means that partially sighted visually impaired people can enjoy reading by themselves, without external help. This system forever changed the lives of people with visual impairment. It became an essential means for freedom of expression, opinions, social inclusion, advancement of knowledge and most importantly education!

Braille literacy is a very important factor in providing equal opportunities for people with blindness, as everyone deserves accommodation and is entitled to the same services regardless of ability.

This unique system of raised dots is also a much better way of understanding pronunciation, grammar, and spelling than audio, So the system forever revolutionized the way blind people perceived and contributed to the world.

BEFORE BRAILLE WAS INVENTED:

Before this form of communication was invented, visually impaired people read using the Haüy system, which was complicated and required much training and only allowed people to read, and not write. An entire type of communication in itself was cut off to the visually challenged population, discouraged by this, Braille at 15 invented the Braille code.

There are many versions of Braille today, some examples are braille Rubik’s cubes, watches, Lego-style bricks, and other innovations that are constantly developing and helping increase braille literacy. Though initially Louis Braille’s code was arranged in small rectangular blocks with raised dots in a 3 x 2 pattern, where each cell represented a letter, number or punctuation. There are many places where you can find braille on objects every day, like signs, ATMs, elevators, calculators, and more, though it needs to be implemented in a much wider manner.

IMPACT ON PEOPLE AND SOCIETY:

Truth is that even till this day, we see that not many people have access to learn braille. Till this day, we see many blind people, who are forced to attempt sustaining themselves by begging. This was the larger reality of visually challenged people before Braille.

Learning braille meant the difference between illiteracy and having access to a good education, and with education blind people can do much better for themselves and contribute to society by pursuing a career and succeeding at their jobs.

Being literate in braille gives blind people access to jobs that they might otherwise not be able to have. For example, Chris Coulter, a woman who had been blind since birth, but because of braille, was able to pursue a job as a voice actress. She does radio commercials and so on, and to do this her script must be in braille, and without braille she couldn’t read her script.

Braille is still an invaluable tool in the lives of the visually impaired people, and the evolution of its nature has made it even more useful.

To Quote Bob Ney, “Effective use of Braille is as important to the blind as independent mobility, knowledge in the use of adaptive technology, and the core belief that equality, opportunity, and security are truly possible for all people who are blind.”

World Braille Day serves as a reminder of the seriousness of the accessibility and independence for individuals who are blind or visually impaired. Even today, the majority of establishments such as restaurants, hospitals, banks, and many other quintessential places don’t provide braille versions of their print materials. For example, restaurant menus and prices, bank records, hospital bills and many more. This is an important reason for people with blindness or visual impairments to not have the autonomy to choose a meal by themselves or to keep their finances private.

This day spreads awareness about braille and other accessible forms of communication which is extremely necessary and to remind us to do our part to make our workplaces, surroundings, stores etc more accessible for everybody.