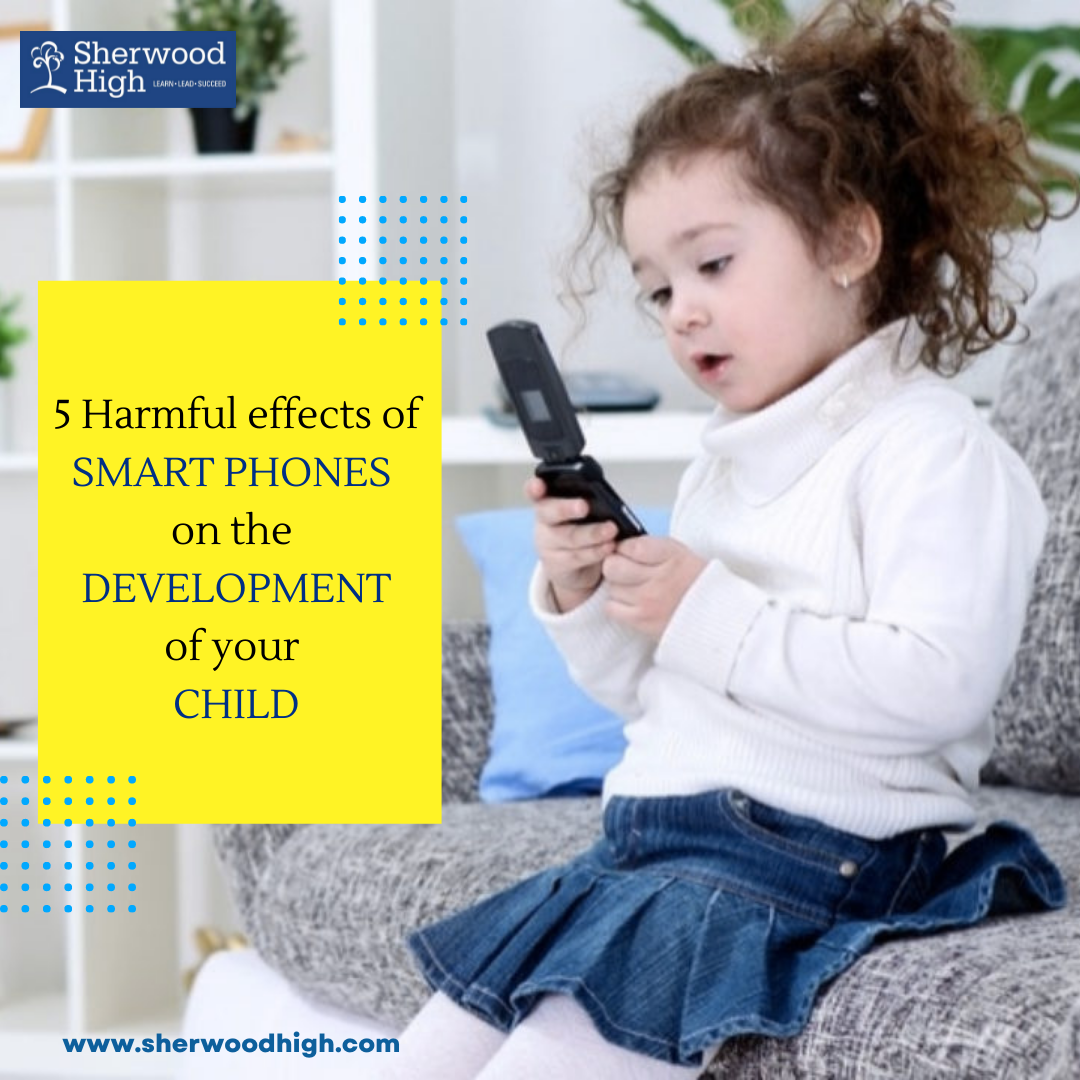 5 harmful effects of smartphones on the development of your child.

5 harmful effects of smartphones on the development of your child.

In today’s globalized digital world, the usage of smartphones is rapidly increasing. This does not mean only adults, but also includes children of all ages. Children all around the globe have started using smartphones for various purposes. Whether for talking to their friends and relatives on video calls or playing games, or on social media or even for online education.

We now have more reason for concern over the excessive use of technology among the youngest of the young, as little kids’ smartphone usage has risen dramatically, according to many studies.

Though most parents would have tried to limit their children’s screen time before the pandemic, we all saw those time limits explode once the lockdown began.

While at Sherwood High, we understand there are many positives to the internet and technology is an abode of knowledge for children, and the learning benefits of smartphones cannot be ignored, we believe that with the benefits there are a lot of risks that come along which cannot be neglected.

The kids of this generation are continuously hooked on to smartphones for such a long duration of time from a very young age. Some parents feel proud of how their young children can navigate through the apps and smartphones with great ease, while some parents allow their children to use smartphones all day to watch YouTube videos to play games and use social media without understanding the negative impact on their child’s development.

We believe that if parents properly guide and manage their child’s usage of smartphones, it can be greatly beneficial for them, but without proper guidance, the drawbacks of smartphones and its negative impact on children’s development, health, and studies is a matter of concern. Therefore, we will look into the negative effects of smartphones on the development of your children in this blog. 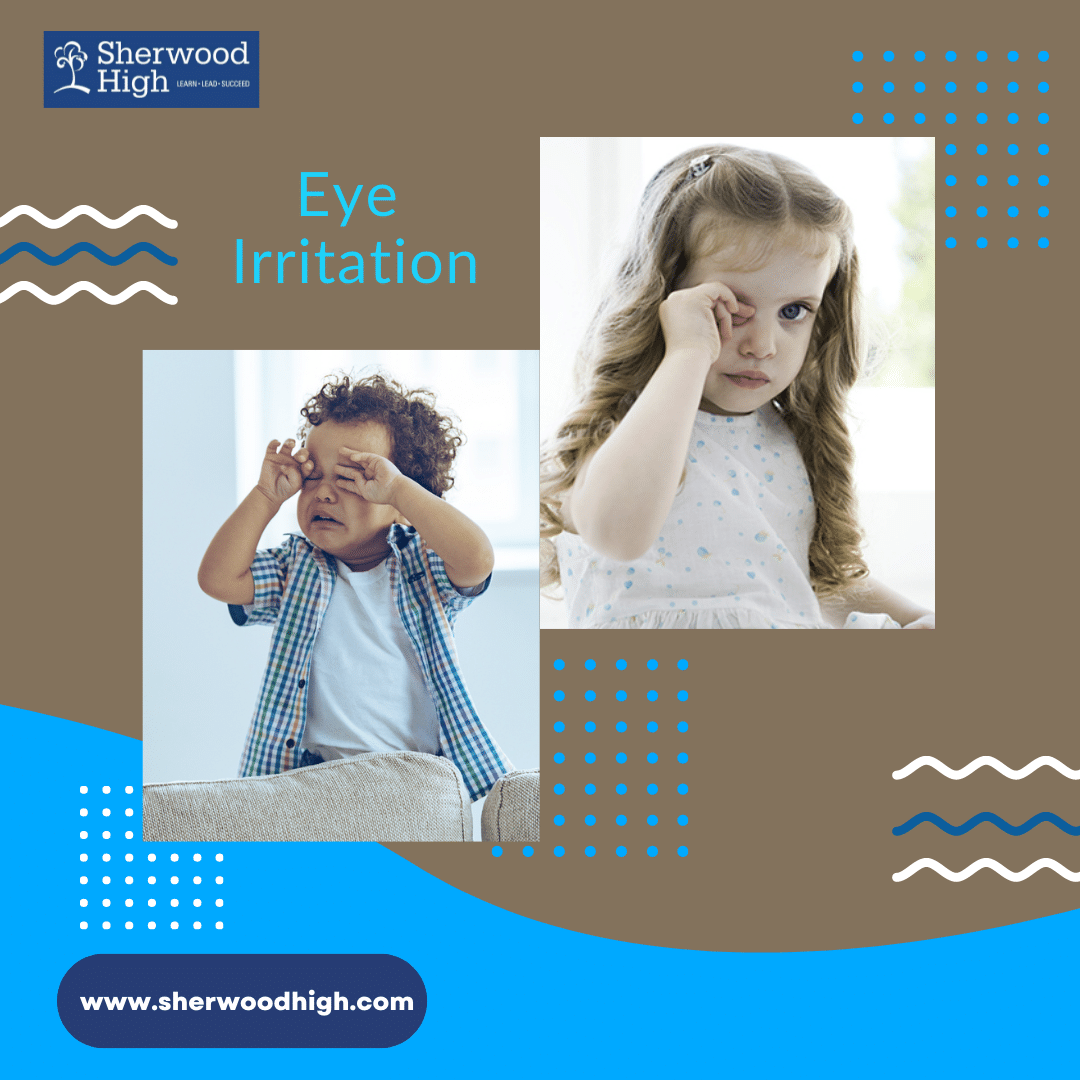 Though there is currently no research yet to prove that looking at screens for long durations of time can cause permanent eye damage, it is certainly known to cause discomfort. While both adults and children who use excessive smartphones experience this discomfort, children are more susceptible to developing symptoms depending on the ways they use their devices. The term “digital eye strain” refers to symptoms caused by prolonged usage of smartphones that include pain, blurred vision, headaches, dry eyes, and fatigue.

Young children these days increasingly involve themselves in playing online games and watching YouTube videos for hours together, which can in fact affect their eyesight. Children aren’t very cautious about the use of smartphones and hold their phones too close to their eyes, which eye specialists all over the world have continuously advised as something to be avoided.

According to a popular research from the Chonnam National University most children aged 7 to 16 who spent a significant amount of time on their smartphones were said to have become cross-eyed. The research concluded saying that spending 4 to 8 hours a day on smartphones is most likely to cause cross eye.

While these problems may be temporary, doctors suggest that smartphone usage must be limited to a certain amount of time every day or to take 30 minutes intervals as a break for the eyes now and then. It is also important to teach children to hold their phones further away from their eyes and to adjust their devices’ brightness to a necessary minimum.

While we do not want to scare you with this information, the truth is that various studies show that there has been a risk of tumours for those who use smartphones excessively.

Though there is limited evidence to prove that tumours are in fact caused exactly due to cell phone radiation, we are certain that there is a possible increased risk involved when smartphones are used excessively. 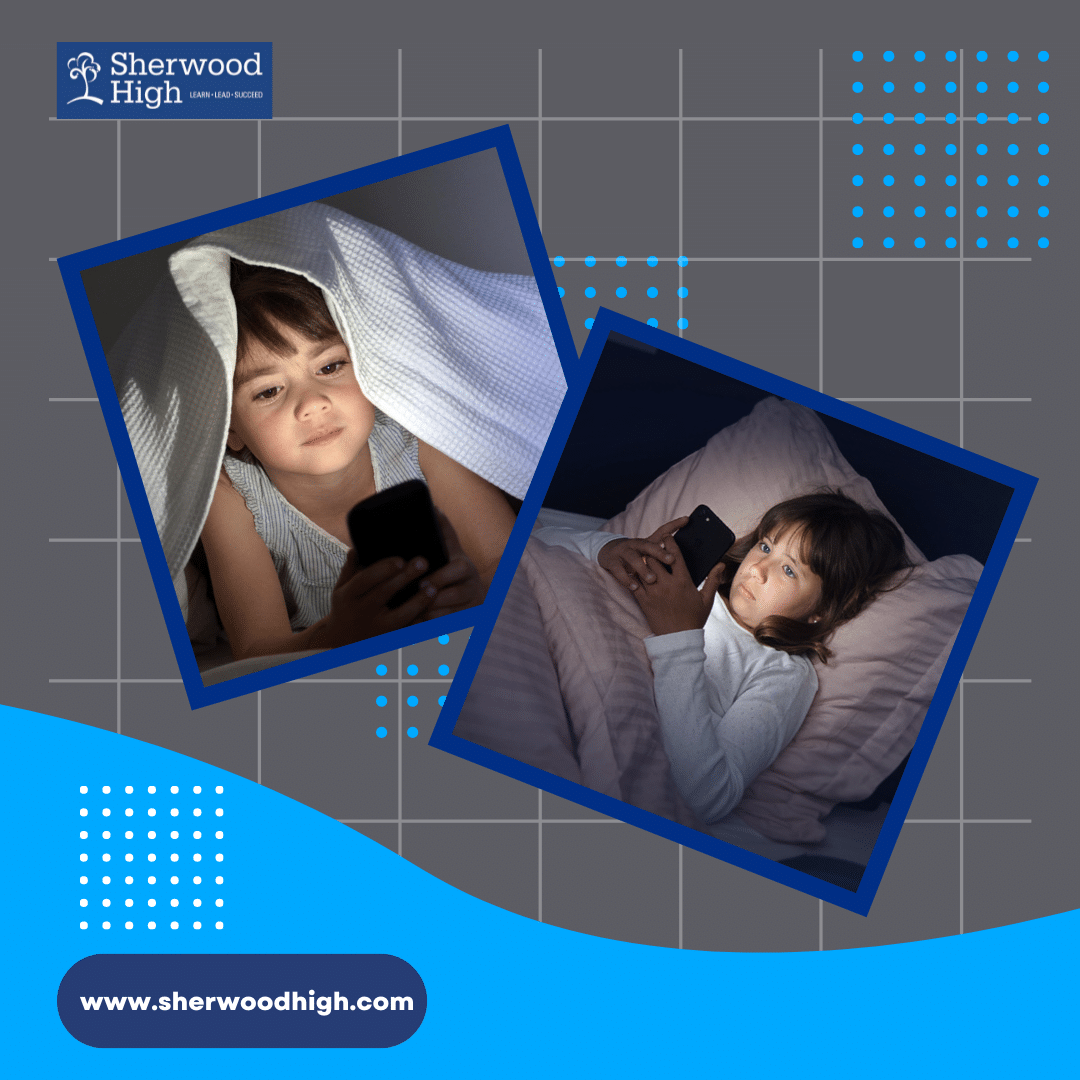 Most children use their smartphones before going to bed. They could either be staying up late talking to their friends or playing games, watching videos or just scrolling through social media. This mindless staring at smartphones at late hours over a period of time causes fatigue and restlessness, as using any electronic devices late at night can lead to reduced sleep timing. This is caused due to the emission of blue light, which all digital devices emit and are known to be harmful to our eyes, and also trick our brain into thinking that it is still daytime.

These sleep disturbances even disrupt children’s academic life as when children are sleep deprived during the night, they are too sleepy to concentrate during classes, leading to the domino effect that seeps into all walks of their lives.

There have also been several recent studies which show that the lack of quality sleep in children not only affects their academic performance but also affects their physical development, productivity, attention, and energy levels. Therefore, it is essential for us to enforce strict rules about smartphone usage at night to ensure quality sleep for our children. 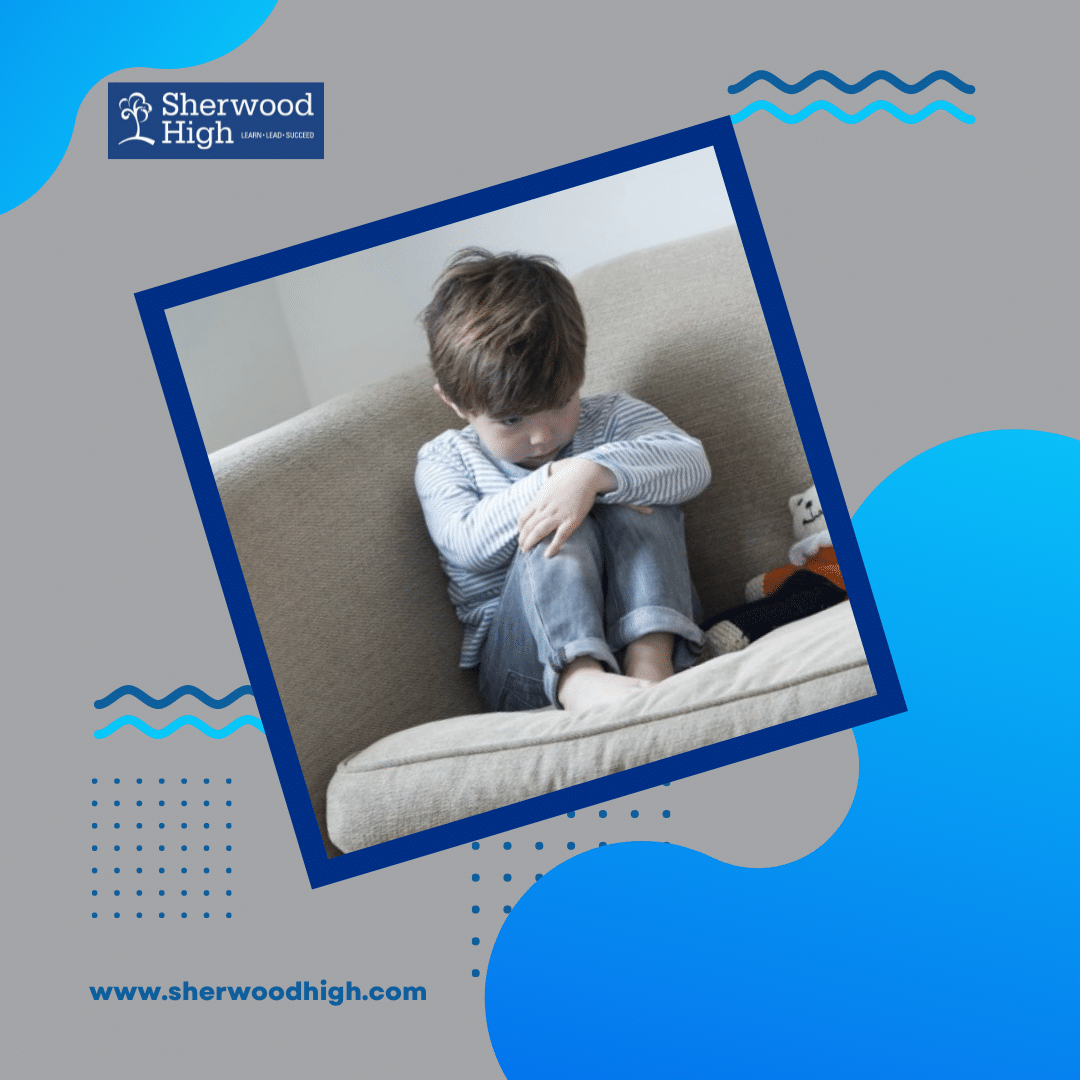 The increased use of smartphones makes children addicted to social media as most children use social media as a platform to connect with friends and to be updated on the new trends today. It is commonplace for children to compare themselves with their peers and to even post content in a certain manner to gain more engagement.

The Internet is a very vast space and there is a high probability of children encountering a variety of inappropriate behaviour which may have a negative effect on their mental health. Many kids who come in contact with cyberbullies and face harassment over the Internet only admit their experience much later in life when the damage has already been done to their mental health.

New studies also suggest that an hour a day spent with their smartphones plays a significant part in the rise of depression and anxiety among children. Kids and teens who use social media tend to have low self-esteem, anxiety, depression, and poor quality sleep according to the British Psychological Society.

As parents, we need to teach our children the threats, dangers, and safety measures of social media and teach them how to block unwanted communication, as it is our responsibility to be watchful and keep track of our children’s activities. Have clear and friendly conversations about cyberbullying, and what is harassment to help children understand how they can prevent themselves from being bullied.

You can read our blog “Teaching safety measures to children in order to protect your privacy from social media”, for more in-depth information regarding social media safety.

5. Affects their ability to learn: 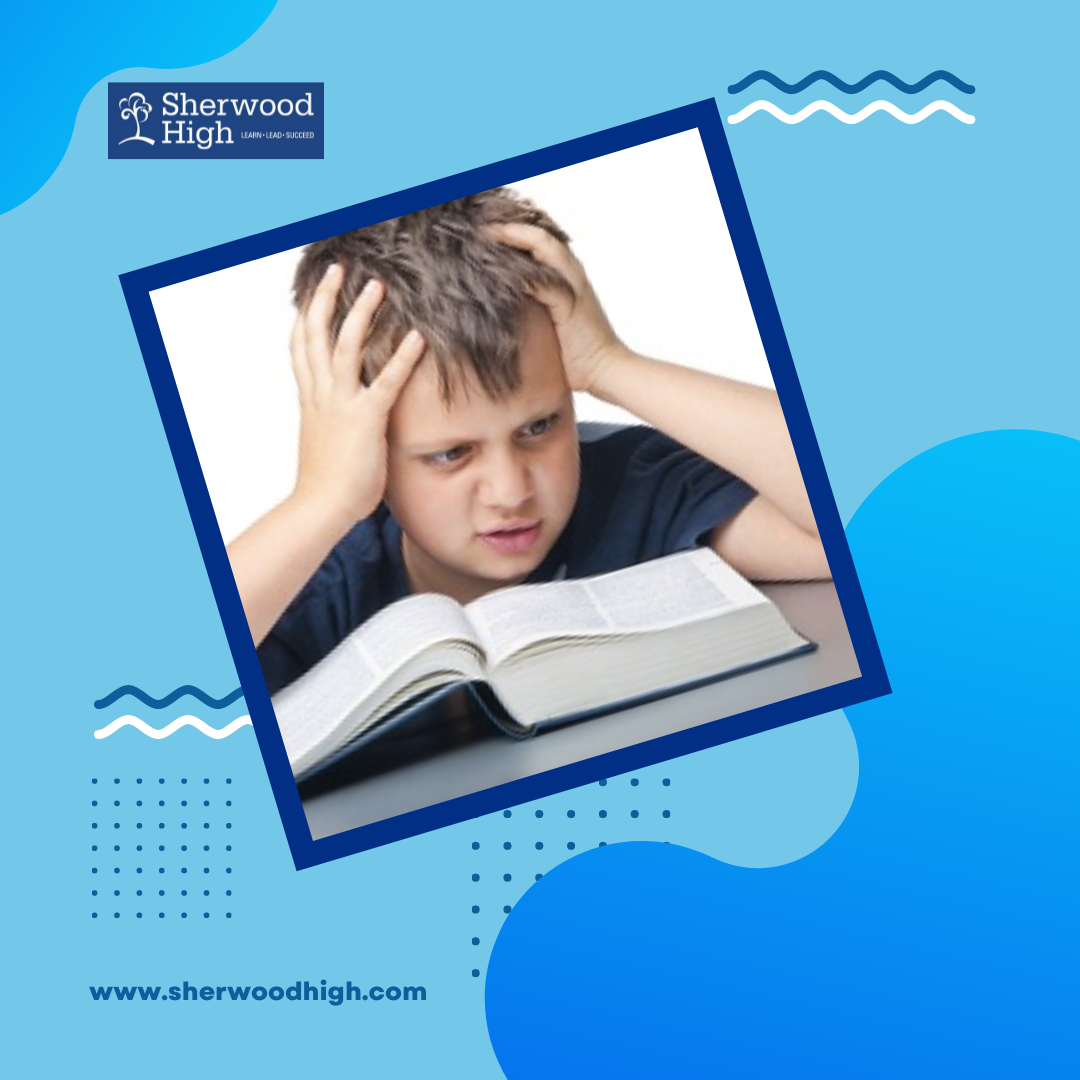 Many researchers have confirmed that smartphones are detrimental to children’s social and economic development as the Child’s attention is diverted by the use of it. To be more specific, the use of interactive screen time on hand-held devices such as smartphones also impairs children’s development of the skills needed to learn math and science according to the findings of the research.

As most children carry phones along with them to their schools and classes these days, it is the smartphones that take precedence over what is being taught at school. The result of such behaviour is an obvious impact on their academic performance as children increasingly become addicted to their smartphones and fail to pay attention during class and miss out on important chapters consequently being clueless about the same during examinations, causing low grades.

There is also a high chance of academic malpractice as smartphones are capable of storing a lot of educational information and give the children the ability to find any answer at their fingertips. As simple as storing screenshots or pictures of notes, to using the internet to search for an answer or using the inbuilt calculator in test where using a calculator is not allowed, to even exchanging answers with other students via chat during the exams are all behaviours that have been widely observed in various schools.

These kinds of activities not only lower their grade and reduce their learning capacity but also result in personality issues.

Smartphones today have become both a boon and a curse for youngsters. Smartphones have been a great tool that children of all ages used to study, (especially during the pandemic), in a fun and engaging way, and to express their creativity, while also staying connected with friends and family, for safety and security, et cetera.

On the other hand, excessive use of smartphones is bound to have a negative impact on your child’s overall health and development. The blue light and radiation emitted by smartphones are harmful for both children’s eyes and brain, and it has the ability to damage their eyes and alter their thought process as well. As numerous studies have shown that excessive amounts of Screen Time damages brain structure by causing grey matter atrophy, reducing cortical thickness, compromising white matter integrity, impairing cognitive function and debilitating dopamine function.

It is high time to take screen time limits extremely seriously, as it is ultimately in the hands of parents to eliminate all these risks from their children’s development by being more watchful and by limiting screen time effectively. It is true that even as adults it is quite difficult at times to limit ourselves with our smartphone usages, which makes it all the more important to limit children’s screen time as they are much more susceptible to experiencing the above said problems.

At Sherwood high we believe it is our responsibility, as teachers parents and caregivers, to educate ourselves on best practices related to children and mobile phone usages, to stay conscious of our kids’ habits and whereabouts, while also trying to work with them to find the right balance of using smartphones constructively.